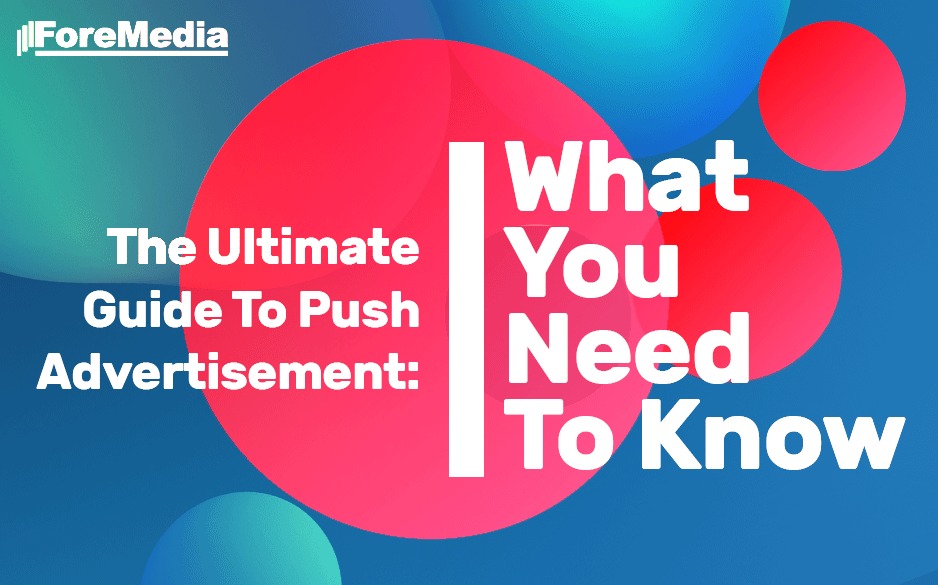 The Ultimate Guide To Push Advertisement: What You Need To Know

The Ultimate Guide To Push Advertisement: What You Need To Know

Push ads, push notification ads, or push advertisement, whatever you name it, this ad format has performed really well for advertisers and affiliate marketers last year. And this trend will follow this year too.

And since the users who receive push ads opt-in to do so, these ads are more user-friendly than most other ad formats. This means, with push notification ads, you have a better chance to reach a highly-engaged audience who are more likely to interact with your ads.

And this is something no advertisers and affiliate marketers would like to miss. That’s why, in this article, we’re going to explain what push ads are and why you should be using them too. We’ll also discuss why this particular ad format performs really well and what are the best verticals for running an ad campaign using push advertisement

What Are Push Notification Ads?

As a result, this ad format doesn’t disrupt the audience and sent relevant ads to the right audience which makes the ad campaign successful.

Whenever someone clicks on the ad, the ad format redirects them to the landing page of the product or service you’re trying to sell. Also, only the people who opt to receive push notifications from certain websites receive those ads. This, in turn, make the audience that clicks on the push advertisement more likely to convert than many other ad formats.

So, unless your target audience is using an iOS device, you can reach pretty everyone with a push notification ad.

Benefits Of Push Ads Vs Other Ad Formats

An affiliate marketer and advertiser has to take a lot of things into account including market research, target audience, industry metrics, etc before choosing the right ad format for their next campaign. And according to the stats, most publishers use push notification ads for their website before placing any other type of ads.

But why is that?

That’s because people actually click on those ads. And this is a win-win situation for both affiliate marketers and the publishers.

Push vs Other Ad Formats

Why Push Advertisement Work So Well?

Let’s get real. In this world, consumerism is never going to stop. In fact, it keeps increasing. But the purchase behavior of the consumers is changing with time too. So, affiliates and advertisers have to change the way they target people to get the best results for their affiliate campaigns. As a result, we finally got push ads.

According to a SODP study, a site with 100k monthly unique US-based visitors with a subscribe rate of 4% and a churn rate of 20% can get more than 18k monthly after two push notification ads per user per day.

It shows us that people usually like receiving ads in this ad format. People opt-in to receive push notifications with their own free will because they want to receive them.

So, if you give people the exact thing they want via push ad format, it would be a win-win situation for everyone.

To succeed in any affiliate marketing campaign, you have to create a perfect match between the verticals, ad formats, and your target audience. And while push notifications ads work with any industry, there are some industries for which this ad format works relatively well than others.

So, if you’re an affiliate marketer who is looking to target any of the above industries, then you should definitely consider using push ad format to engage with your audience without annoying them and get more sales.

Since its discovery, push ads have proven to be a revolutionary tool for advertisers and affiliates to promote the products and services effectively and maximize their ROI. Thanks to this ad format’s user-friendly structure, you can target the right traffic without irritating them and instantly catch their attention. Now that you know the benefits of using push ads and the best verticals, it’ll help you make the right ad strategy and earn more profit.

PrevPreviousNative Advertisement: What Is It And Why Is It Important For You?
NextTop 3 Reasons You Should Run Ad Campaigns During WeekendsNext