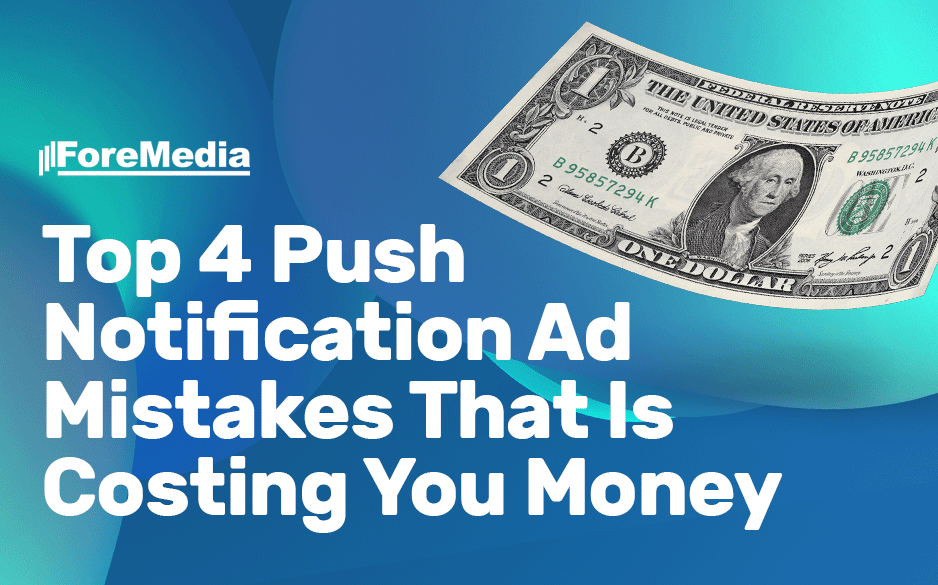 Push notification ad is a revolutionary way to advertise that has been a boon to both the publishers and advertisers. But even though the results of push ad campaigns are inspiring, one has to implement the right tactics to make the most out of it.

But many new advertisers make a lot of mistakes that ultimately cost them money.

In this article, we’re going to talk about the top 4 push notification ad mistakes that are costing you money and how to avoid them.

Don’t Use The Same Creative For Too Long

If you want to be successful with your push notification ad campaigns, then you have to follow the rules of it. And one of those important rules is to keep changing the ad creative once in every single week or two.

But why is it important?

Well, aside from preventing the ad fatigue, you also need to take care of your competition. No matter which industry you’re in, there will always be someone selling similar things. So, if your competition has an awesome creative that’s generating higher CTR, then you might lose on the best customers and quality traffic.

But you don’t want to let that happen, do you? So, don’t let your competition get all of the pie. Change creative regularly, test different creative, and generate more ROI.

Don’t Target Everyone With The Same Push Notification Ad

Are you trying to target different kinds of audience with the same push notification ad? If you’re doing this, then you’re definitely losing money in your ad campaigns. For example, let’s say you’re running an ad campaign to sell makeup products. So, if you’re targeting both men and women for your current ad campaign, then your ads won’t be as effective as it should be.

That’s why it’s extremely important that you target different people with a different set of ads that contain different creative and copy specifically targeting a specific type of audience. This way, you can make the most out of your campaign budget.

When you set to create your first push notification ad campaign, you might see several countries listed together according to their payout amount. But that doesn’t mean you should include all those countries in the same campaign. Don’t ever do that.

If you do this, two problems will occur:

So, don’t make this mistake. Otherwise, you might have to pay for this.

Make Things Easier For The User

If you want to make your campaign successful, then you have to prepare for it beyond just running an ad campaign. In fact, you have to work on your funnel to make things easier for the leads to close the deal.

Do your ads describe the product or service just the way they are? Keep in mind that none of your customers would want a nasty surprise when they finally get to the landing page. Also, make sure you remove all unnecessary steps and pre-landers from the funnel. Make your sales funnel live up to the things your ad and you’ll hit the home run.

PrevPreviousChrome 80 Update: How Will It Affect You Push Ads And Earnings?
NextHow To Test And Run Successful Native Ad Campaign?Next